Archeologists have discovered evidence that humans started using a vented form of heating about 100,000 years ago, but central heating systems apparently didn’t come into use until 2500 BC. The excavated remains of the Temple of Artemis at Ephesus (located in modern-day Turkey) revealed flues in the ground, which appeared to be designed to circulate heat produced by a fire. There was also evidence of radiant heating in structures built in the Roman Empire.

After the fall of the Roman Empire, humans resorted to simpler heating systems such as fireplaces until the early Renaissance period. Monks in Europe built central heating systems by diverting river water, heating it with a wood-burning furnace and circulating it through pipes. This was very similar to boilers of today, except they probably didn’t have heating system repair tradesmen like we do now.

Heating systems continued to develop well through the Colonial period: Benjamin Franklin introduced the Franklin stove in 1741, while across the ocean James Watt developed the first steam-based heating system, which was further refined into the 1800s. The radiator as we know it today was invented in Russia in 1855, and 30 years later the first thermostat was patented.

In the early 1900s, Albert March discovered Nichrome, which came into use in two appliances that are still being used today: toasters and electric heaters. Around this same time, Willis Carrier started developing the first air conditioning system, the same technology that would be used for heat pumps. In 1919, the first modern central heating system was developed, and later enhanced with a forced convection system that became the ductwork system that we know today. Further improvements continued to be developed, resulting in energy-efficient furnaces, heat pumps and smart technology, the benefits of which we’re all enjoying today.

Call Schmitt for Your Heating and Cooling Needs

Schmitt is your leading provider of heating and air conditioning repair services. Give us a call at (415) 689-7849 or fill out our contact form. We serve customers in San Francisco and nearby areas. 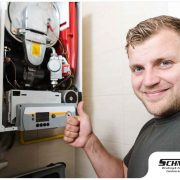 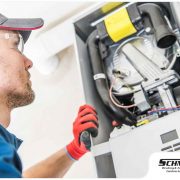 Why Is Furnace Sizing So Important? 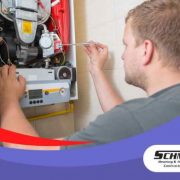 3 Top Tips for Heating Your Home More Efficiently this Winter

How to Avoid These 4 Common HVAC Scams
Scroll to top